Journal Club for April 2020: Curvature-Affected Instabilities in Membranes and Surfaces

Journal Club for April 2020: Curvature-Affected Instabilities in Membranes and Surfaces

Confined thin shells, films and membranes are prone to lose stability to relieve the in-plane compression energy, which is traditionally regarded as a first route towards catastrophic failure [1]. From another perspective, this buckling behavior can be harnessed to realize certain functionality with the burgeoning use of extremely deformable materials and structures [2][3][4], such as the synthetic camouflaging skins via programmable wrinkling textures [5], shape-morphing of soft robotics actuators [6], bifurcation-guided printing of autonomous actuation [7], shape-programmable multistable surfaces [8], dynamic tuning of wrinkle-patterned topographies [9], and adaptive aerodynamic drag control [10]. Manipulation of reversible instability response, especially the flexible transition between buckling and stabilization regimes, would be a key for relevant applications. Such control can provide insights into fabricating topology-related functional membranes in broad applications.

Curvature and mechanics are intimately connected in thin objects. Curvature in conforming materials to rigid substrates can guide the self-assembly of defects such as crack paths [11] and pleats [12][13][14]. Surface curvature plays a key role in wrinkling pattern selection and morphological transition in core-shells [15][16][17][18][19] and curved film/substrate systems [20][21][22]. Spontaneous curvature can induce rotational symmetry-breaking buckling and snapping instability in thin shells [23][24]. Yet curvature can hold a delaying effect on the formation of wrinkles in a homogeneous growing system [25], and instabilities occur first in regions with the lowest curvature in a heterogeneous system for the morphogenesis of developing mammalian brain [26]. Combining curvature and cuts can realize wave propagation in kirigami structures [27] and network construction of curvy filamentary structures leads to a bending-stretching transition of deformation mode under tension [28]. Understanding the mechanism of curvature effects on morphological evolution and pattern formation is, in fact, crucial for the effective use of wrinkling as a tool for realizing multifunctional surfaces.

This month jClub is intended to initiate and encourage discussion on curvature-affected instability phenomena in membranes, surfaces and slender structures. Other influencing factors such as growth, medium and photo are also involved. Former jClubs on instability of soft materials are listed here for reference, e.g., by T. Zhang, S. Rudykh, P. Rothemund, etc. Here, we provide a few recent illustrative examples from the large body of relevant works on this vibrant topic.

Twenty years ago, Friedl et al. [29] and Cerda et al. [30][31] revealed that transverse wrinkles can occur in a uniaxially tensile elastic membrane. However, their investigations and other early studies were strictly constrained to small membrane strain (∼1%) of a stiff flat sheet, while a few recent works found that tension-induced transverse wrinkles on soft films can be stabilized upon excess stretching up to ∼30% overall strain. Zheng [32] first studied a restabilization phenomenon in a highly stretched sheet, demonstrating that wrinkles appear first, then decrease, and finally disappear with the continuous increase of stretching, as shown in Fig. 1. Later, Healey et al. [33] derived a rational Saint-Venant Kirchhoff (SVK) model by accounting for large in-plane strains to predict wrinkling-restabilization (isola-center bifurcation), with drastic contrast to the ever-increasing wrinkling amplitude vs. overall strain obtained by classical Föppl-von Kármán (FvK) plate model. They pointed out that the nonlinear in-plane components in geometric equations play a crucial role in the disappearance of wrinkles. Recently, Fu et al. [34] established a modeling and resolution framework through extending the nonlinear FvK thin plate model to finite membrane strain regime for various compressible and incompressible hyperelastic materials, and then Wang et al. [35] analytically interpreted isola-center bifurcation points based on Koiter stability theory and provided a 3D phase diagram on stability boundaries.

Fig. 1 Wrinkling-restabilization evolutions of highly stretched hyperelastic films. The tensile strain is continuously increasing from the left to right.

Do tensional wrinkles in thin films depend on curvature? How does curvature affect pattern formation and pattern evolution? Whether does curvature trigger or delay stretch-induced wrinkling behavior?

Lately, Wang et al. [36] found that the curvature can control effectively and precisely the wrinkling and smoothing regimes (see Fig. 2). When the sheet is bent, the regime of wrinkling amplitude versus membrane elongation is narrowed, with local wrinkling instability coupled with global bending. There exists a critical curvature, where no wrinkles appear when the value is beyond this threshold. To quantitatively understand the underlying mechanism and the evolution of wrinkling-restablization regimes as well as influential factors, Wang et al. [36] developed novel theoretical models that can describe large in-plane strains of curved soft shells to effectively capture their nonlinear behaviors. The models build on general differential geometry and thus can be extended to arbitrarily curved surfaces [37].

As for practical insights, fundamental understanding of morphological evolution and 3D phase diagram of stability boundary (see Fig. 2), is critical for the effective use of wrinkling as a tool for morphological design, which may shed light on designs of wrinkle-tunable membrane surfaces and structures.

Fig. 2 (a)-(b) Transverse wrinkles appear in a stretched flat sleeve, while no wrinkles occur in a stretched cylindrical sleeve. (c)-(d) Sketch of the experimental setup and geometry of an open cylindrical shell. (e)-(g) At the same tensile strain, increasing the curvature resists wrinkles, and the membrane remains smooth when the curvature is beyond than a critical value. The right side shows a 3D phase diagram (curvature κ, width/thickness α, length/width β) of stability boundaries. Theoretical prediction of critical surface remarkably agrees with experiments (dots) [36].

Instability patterns of rolling up a sleeve appear more intricate than the ones of walking over a rug on floor, both characterized as systems of uniaxially compressed soft film on stiff substrate [21][38]. This can be explained by curvature effects. Yang et al. [21] revealed a novel post-buckling phenomenon involving multiple successive bifurcations: smooth-wrinkle-ridge-sagging transitions (see Fig. 3). The shell initially buckles into periodic axisymmetric wrinkles at the threshold and then a wrinkle-to-ridge transition occurs upon further axial compression. When the load increases to the third bifurcation, the amplitude of the ridge reaches its limit and the symmetry is broken with the ridge sagging into a recumbent fold. It is identified that hysteresis loops and the Maxwell equal-energy conditions are associated with the coexistence of wrinkle-ridge or ridge-sagging patterns. Such a bifurcation scenario is inherently general and independent of material constitutive models.

Fig. 3 Soft shells sliding on rigid cylinders. (a) Patterns upon rolling up a sleeve. (b) An air-inflated latex balloon with one end fixed on an acrylic rod. With increasing compression from the right side, four distinguished states are observed: (c) initial undeformed configuration, (d) wrinkle, (e) ridge, (f) sagging ridge. (g)–(j) are representative sketches corresponding to (c)–(f), respectively. The right side shows a bifurcation diagram of dimensionless deflections of the ridge peak (red curve) and its neighboring wrinkle peak (blue curve) as a function of overall compressive strain [21].

Apart from cylindrical geometry, curvature-induced symmetry-breaking pattern formation and transition are widely observed in spherical film/substrate systems across different length scales such as embryogenesis, heterogeneous micro-particles, dehydrated fruits, growing tumors and planetary surfaces [15][39][40][41][42][43]. Lately, Xu et al. [19] revealed that surface morphological pattern formation of core-shell spheres upon shrinkage of core (or expansion of surface layer) are primarily determined by a single dimensionless parameter Cs=(Es/Ef)(R/hf)^3/2 which characterizes the modulus ratio (Es/Ef) and geometric curvature (R/hf) of core-shell spheres (see Fig. 4). Understanding morphological selection and transition, and in particular the dependence of wrinkling behavior on curvature offer the necessary guidance for multifunctional surface design and fabrication based on wrinkling. Roll up your sleeves, there is more work to do in this area [44]. 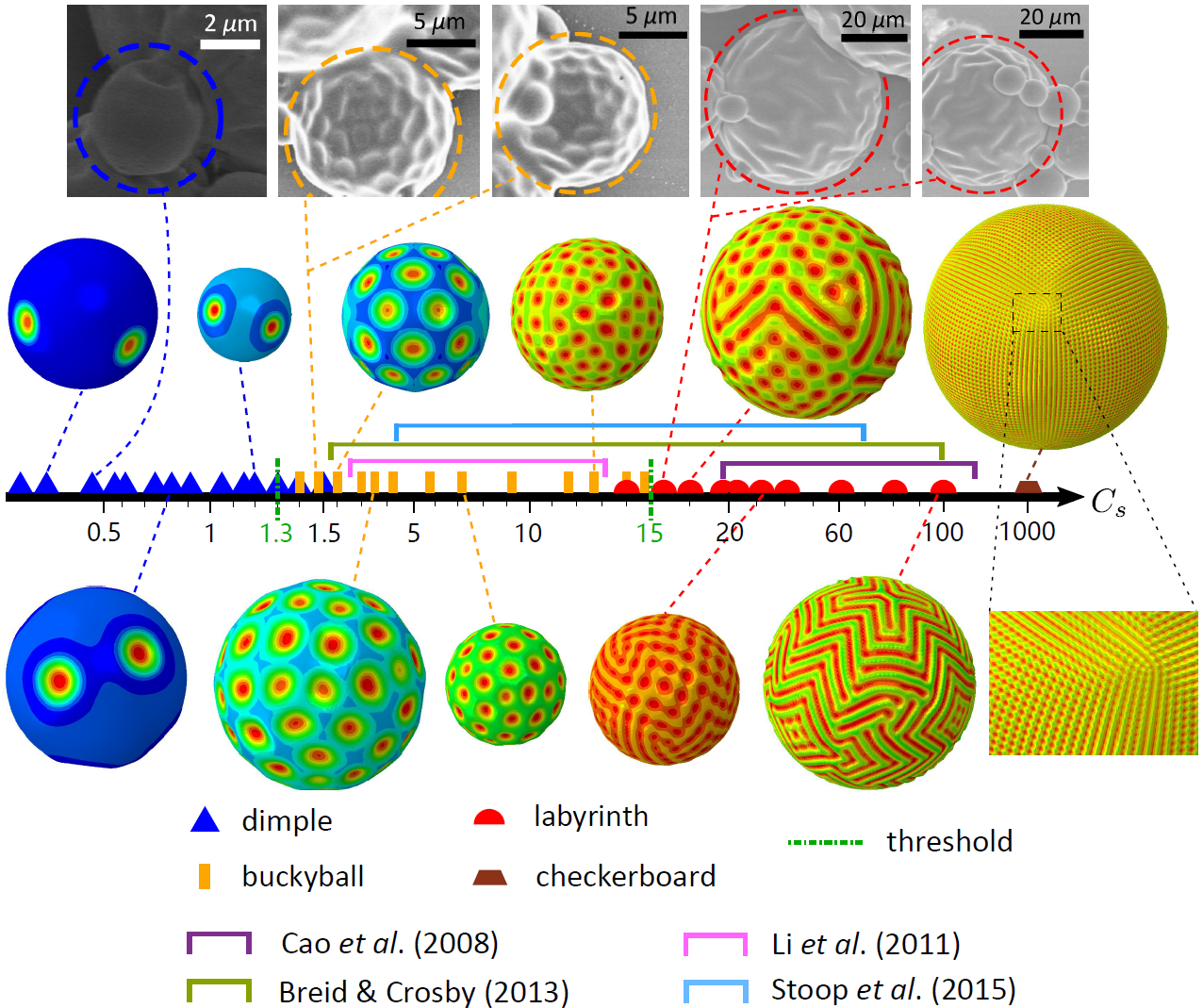 Having waves in morphological pattern is energetically favorable for thin living tissues [45] such as leaves [46][47], flowers [48][49], and biological membranes [50], where spontaneous symmetry breaking induced by differential growth is normally considered as a significant factor in the origin of such complex patterns. Growth-induced morphogenesis can be affected by many elements including intrinsic (e.g., gene [45]) and external (e.g., phototropism [51]) ones. Lately, Xu et al. [52] observed that water can dramatically alter the morphogenesis of lotus leaves in the same plant, where the ones floating on water demonstrate flat geometry with short-wavelength wrinkles on the edge, while the leaves growing above water usually morph into a bending cone shape with long rippled waves near the edge (see Fig. 5). Such a phenomenon reveals the interplay between internal growth-induced residual stresses and external support from the water (liquid substrate), which affects the morphogenesis of growing tissues. Besides, other influencing factors, such as mechanical constraints from the stem or vein, heterogeneity-induced growth curvature and size effect (see Fig. 5), can alter the shape of leaves. Understanding growth-triggered morphological evolution and in particular the dependence of wrinkling behavior on liquid foundation can help design biomimetic deployable structures that quantitatively harness surface instabilities using substrate or edge actuation [53][54].

Fig. 5 The left side indicates water effect on morphogenesis of diverse aquatic plant leaves. A floating lotus leaf (a) grows with short waves along the edge, while suspended lotus leaves (b) and (c) morph into long wavelength ripples near the margin. With water foundation, the leaf of white water lily (d) remains flat, while for the suspended leaf (e) globally bends with long ripples near the edge. The leaf of Victoria water lily (f) where water substrate occupies about 80% of the entire leaf area (local effect of liquid foundation) grows into a bowllike shape with sharp edge bending. The right side illustrates size effect (R/h) on growing shapes of lotus (circular) and white water lily leaves (fan-shaped): (a), (b) water foundation (blue background), (c), (d) suspended (stem support) [52].

Implantable electronic devices, such as sensors and probes, have enabled the precise measurement of biological activities treatments to be delivered to a specific location. However, most sensors cannot adapt to the physically dynamic and biochemically complicated environment in vivo. Biological tissues are soft, curved and transient, whereas most flexible sensors made from monolithic membrane substrates with large sizes show high bending stiffnesses that further increase after coating the substrate with conductive and sensing materials. Mechanical mismatches between implanted electronics and biological tissues can lead to inaccurate readings and long-term tissue damage [55]. Wang et al. [56] designed a flexible fibre-based implantable electrochemical sensor that mimics the hierarchical curvy structure of muscle (see Fig. 6). The sensor, which was generated by twisting carbon nanotubes into helical bundles of fibres, resembles muscle filaments and matches the bending stiffness of tissues and cells and therefore, provides a flexible, strong and stable fibre–tissue interface. The implantable fibre showed good biocompatibility and was further modified to adapt to applications in vivo.

Fig. 6 The left side demonstrates a bio-inspired hierarchical helical structure (mimic muscle) and the implantation of the biosensor [56]. The right side shows a highly sensitive piezoresistive pressure sensor fabricated on the base of bioinspired (i.e., biotemplating and surface wrinkling) multiscale structures [57].

These are a tip of the iceberg of curvatures and instabilities in thin films and slender structures. We hope that this post would initiate insightful thoughts and fruitful discussions in this dynamic research field. I quoted a comment by Reis et al. [3] as the closing of this post: “Modern physics edged mechanics out into the wilds of engineering. But multidisciplinary interest in pattern formation has moved it back into the mainstream, bringing with it interest from other fields.”