Based on our recently published paper “Activation and suppression of <c+a> dislocations in a textured Mg–3Al–1Zn alloy” in Scripta Materialia, we employed a technique “correlative microscopy” to build a bridge between SEM-scale and TEM-scale micrographs. In individual grains, we successfully connected their crystallographic orientation information from SEM (thus the Schmid factor) and dislocation characteristics from TEM. In this article, we would like to share this experimental method and how we utilized it to study the relationship of specific dislocation activation (e.g., <c+a> dislocations) and loading condition of each grain of interest in a hot-rolled AZ31 Mg alloy. For more details, see the full version of the paper.

Magnesium is viewed as a promising structural material in the aerospace industry, considering its low density (1.7g/cm3). However, due to its low symmetry hexagonal closest packed crystal structure, the plastic anisotropy is large. For example, the easiest slip system is the basal <a> dislocations with 1/3<11-20> Burgers vector on the (0001) plane. The critical resolved shear stress (CRSS) is as low as 0.5 MPa [1,2]. A more difficult slip system is the pyramidal <c+a> dislocations with 1/3<11-23> Burgers vector on the 10-11 and 11-22 pyramidal planes [3–6]. The CRSS has been measured to be ~40 MPa [3], which is 80 times higher than that of basal <a>. Such larger plastic anisotropy could lead to early failure [7]. A lot of effort has been devoted to reducing the anisotropy in an attempt to improve ductility [8].

The <c+a> dislocation has attracted extensive research interests recently since it can accommodate the c-axis compressive plastic strain [9–16]. Most research studies were done on single crystals. Researchers found the <c+a> dislocations in pure Mg single crystal can only be activated during compression when the c-axis of hcp structure within a few degrees from loading direction [3], as shown in Fig. 1. However, for polycrystal, it is not clear whether <c+a> dislocation activation in polycrystal Mg is the same as the single-crystal samples [17], especially when the polycrystal Mg is highly textured.

Figure 1. <c+a> dislocation can only be activated when the angle between the c-axis angle and loading direction is within a few degrees.

Here, we demonstrated correlative microscopy is a powerful tool to link the loading direction, crystal orientation, and dislocation characteristics in individual grains. As shown in Fig. 2, the example is from the paper [18], for a standard cubic compression sample, the straight edge is always parallel to the loading direction. We extracted one slice from the compression cube via cutting and polishing, then punched the slice into a disc. Instead of punching into a perfect circular shape, one straight edge is reserved, which is parallel to the loading direction. After the twin-jet electropolishing to cause perforation, electron backscatter diffraction (EBSD) was performed on the TEM foil using the straight edge as one coordinate axis in the inverse pole figure (IPF) map. In this case, the compression direction of the sample is preserved in the IPF map from this special sample preparation method. Note that this technique could also be easily extended to tensile specimens.

Figure 3. The IPF map and the corresponding Schmid factor maps of Mg primary slip systems (basal <a>, prismatic <a>, pyramidal I <c+a> and pyramidal II <c+a>)

To correlate the Schmid factor with dislocation activities, EBSD and TEM were performed in the same area. As an example shown in Fig. 4, the compression direction is marked by the black arrows above the IPF map. The dark feature in the middle of each map is the perforated hole produced by electropolishing. Adjacent to the hole is the electron transparent area for both EBSD mapping and TEM imaging. In the EBSD maps, the grain of interest is unshaded, with the rest being partly greyed out.  Using the compression direction and the grain orientation from the IPF map, grain 2 Schmid factor can be unambiguously determined. The results could be further correlated with the dislocation images obtained from the TEM. In this case, microscale granular-level information can be directly correlated to the nanoscale dislocation activities.

To reveal the dislocation characters, we performed careful tilting experiments in TEM and used g dot b = 0 invisibility criterion to separately illuminate <a> and <c> components. The g-vectors we used to illuminate dislocations are g = [0002] (all c-component will be visible) and g = [01–10] (two-thirds of a-component will be visible). If a dislocation is visible under both g = [0002] and g = [01-10] conditions, it is of <c + a> in nature.

Figure 4. Grain 2 orientation information inside the IPF map from EBSD and the corresponding dislocation micrographs from TEM

Utilizing together various microscopy tools designed for different length scales, researchers have enabled characterization studies that are otherwise impossible. Here are a number of examples. TEM and atom probe tomography (APT) correlative microscopy is already a well-established method to study nanoprecipitates, grain boundaries, and dislocations [19]. Han et al. correlated TEM and SEM to study different types of grain boundaries and defects interactions [20]. Wang et al. correlated EBSD and TEM to study local region twins and dislocations interaction [21]. Recently, Xu et al. correlated EBSD, DIC, and TEM to study active slip modes in hexagonal materials [22]. In this work, we correlated TEM and EBSD to further consider the Schmid factor of individual grains, which enables the investigation of <c+a> dislocations activities after close-to-c-axis compression. EBSD mapping allows for a fast crystal orientation identification of all grains of interest and precise navigation in TEM to locate grains. TEM study of dislocations was then carried out with prior knowledge of Schmid factors of targeted grains from the EBSD maps.

Hot-rolled highly textured Mg AZ31 initial sample and the 2.6% compressed samples along the normal direction (ND) were prepared using the method above. The global EBSD IPF maps were firstly done to confirm the strong c-axis texture along with ND (Fig. 5). For the ND compression sample, the c-axis texture did not change significantly after the compression, as shown in Fig. 5b. This result indicates dislocation-mediated plasticity is the dominant deformation mode. 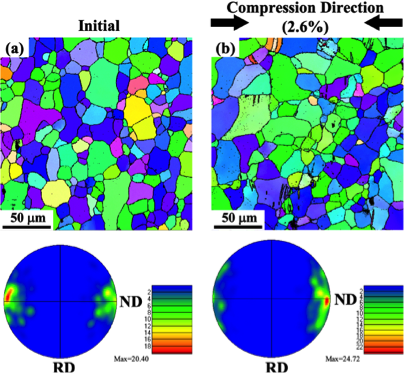 Figure 5. EBSD IPF maps (out-of-plane crystal orientation) of AZ31 (a) initial, (b) compression along the normal direction (2.6% plastic strain), along with the corresponding (0001) pole figures and their highest multiples of uniform distribution (mud) values.

In order to correlate the Schmid factor and the attendant deformation mechanism of each grain, EBSD and TEM correlative microscopy (described above) were performed. The loading condition of each grain (c-axis off angle) was firstly identified by EBSD IPF map; the dislocations in the corresponding grains were examined afterward. As shown in Fig. 6, the orientation of the inspected the grains were highlighted, and the others were greyed out. Despite the strong texture, there is a significant number of grains with their c-axis off the compression direction by large angles (Table 1, also summarized their Schmid factors). We observed that <c+a> dislocations exist in 18 out of 19 grains, even for those with large off-angles with high basal <a> dislocation Schmid factors. 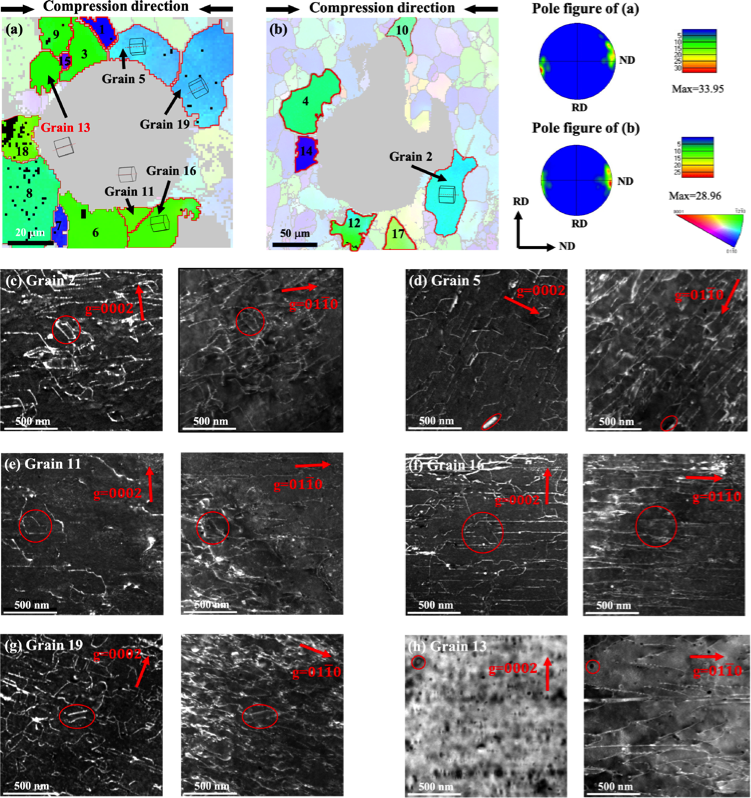 Figure 6. (a) and (b) IPF maps of two specially designed TEM foils near the electropolished perforation region from the ND compression 2.6%-deformed AZ31 alloy. The schematic shows the orientations of labeled grains. The black arrows above each figure indicate the compression direction. (c)–(g) Examples of WBDF micrographs in 5 grains reveal their dislocation characters. The grain labels correspond to their locations in the foil in (a) and (b). Red circles are the fiducial markers to mark the identical sites. (h) BF and WBDF micrographs of Grain 13, showing the absence of <c + a> dislocations. (Image adapted from [18]) 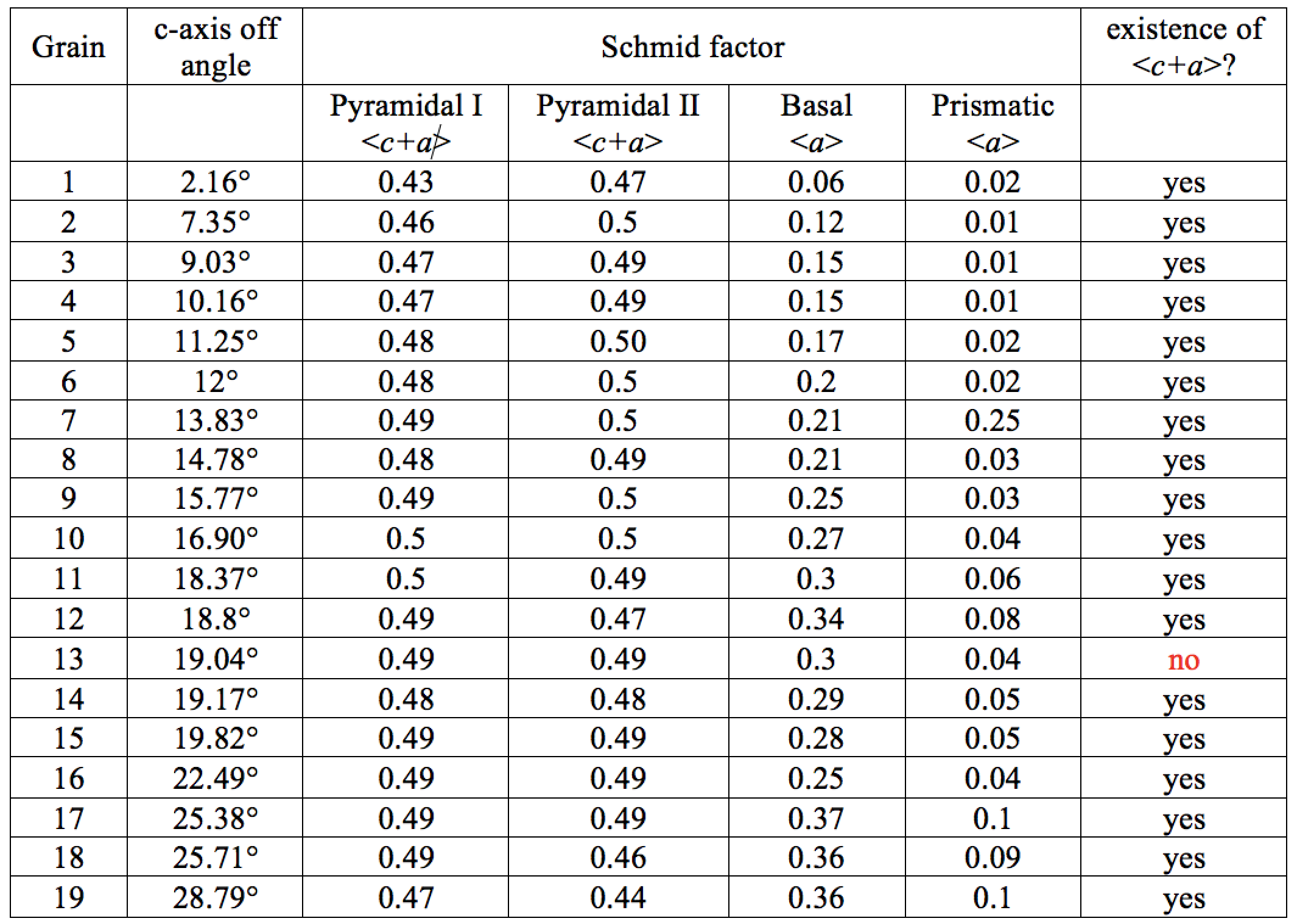 Table. 1 The c-axis off-angle and the corresponding Schmid factor (Pyramidal I, II <c+a>, basal <a> and prismatic <a> dislocation) and the existence of <c+a> dislocation of all 19 selected grains based on TEM images in ND compression samples, respectively.

In this short article, we have demonstrated correlative microscopy could be a powerful tool to connect microscale and nanoscale microstructural information. We also showed how to apply this method to statistically study the relationship between the Schmid factor and deformation mechanism in multiple grains using a highly textured Mg AZ31 polycrystalline alloy as a model material. The methodology illustrated here offers a unique avenue to characterize microstructure in a more efficient and representative manner. The results indicate the deformation behavior in polycrystalline material is much different from that in the single crystals. We foresee the EBSD-TEM correlative microscopy technique could be employed to study the deformation mechanisms of individual grains in polycrystalline alloys, where the plasticity of hard and soft grains are of particular interest.