Common measurements obtained from a shear test include:

Shear strength– the shear stress carried by a material at failure under a pure shear condition or the maximum load a material can withstand in a direction parallel to the face of the material, as opposed to perpendicular to its surface.

Offset shear strength– the shear stress a material sustains at the intersection of the shear stress versus engineering shear strain curve with a line parallel to a defined modulus and translated from the origin by a specified strain. 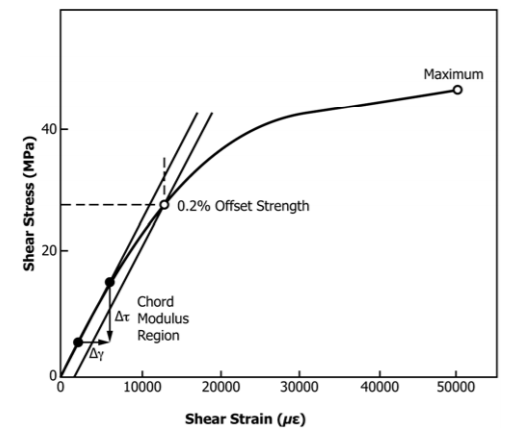 Lap shear testing is a common type of shear test that is often performed on adhesives. Adhesives are used in electronic, construction, and aerospace applications. They join parts together by transmitting stress from one member (substrate) to another in a manner that distributes the stress more uniformly than can be achieved with mechanical fasteners. As a result, adhesive bonding often provides joints that are mechanically equivalent to or stronger than those joined by fasteners.

The aim of joint design is to obtain maximum strength for a given bond area. Factors that affect joint design are the mechanical properties of the adhesive and substrate, residual stresses resulting from adhesive cure and the joint geometry. Furthermore, coatings or interstitial layers between the substrate and adhesive will result in weak bonds. Sunlight, heat and solvents may weaken an adhesive; load-induced stresses also may cause adhesive joint failure at different locations within the joint. A good joint design should minimize stress concentrations, which reduce the overall strength of the joint.

There are many types of adhesive joints for carrying shear loads. The most effective employ an overlapping substrate arrangement known as lap joints. The overlapping area should be large enough to enable the joint to withstand maximum shear service loads. Increasing the overlap length beyond a certain amount has little effect on joint strength, whereas increasing the width of the joint results in a proportional increase in joint strength.

All three of these specifications use a single lap joint (lap shear) specimen to determine the shear strength of adhesives.

Universal testing machines with closed loop servo-controllers are recommended to run shear tests. The testing machine should be able to move at a controlled, uniform rate of loading such that the load may be applied with a continuous motion. Force and displacement transducers should provide an accuracy within +/- 1% of the indicated value. 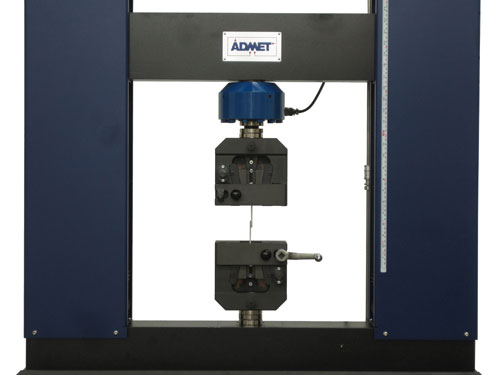 Depending on the required force capacity, vise grips as well as wedge grips can be used in shear test setups. For a lap shear test, it is important to ensure that the grip inserts are aligned so that the centerline of the grip assembly is in proper alignment with the adhesive bond. Vise grips have T-handles that allow adjusting the grip inserts from side to side. Wedge grips do not have the ability to offset the centerline, instead, they can be supplied with spacers for specimen alignment.

ASTM D5379 shear test fixture, developed by the University of Wyoming Composite Materials Research Group, is used with reinforced composites. A picture of the fixture on an eXpert 2600 table-top system is shown below. Each half of the fixture contains a wedge-action grip which lightly clamps one half of the test specimen across the specimen width and supports the specimen on its back face. One of the grips, normally the lower half, is mounted on a base plate which also supports a linear bearing shaft, while the other grip, normally in the upper position, contains a linear bearing which mounts over the shaft on the base. 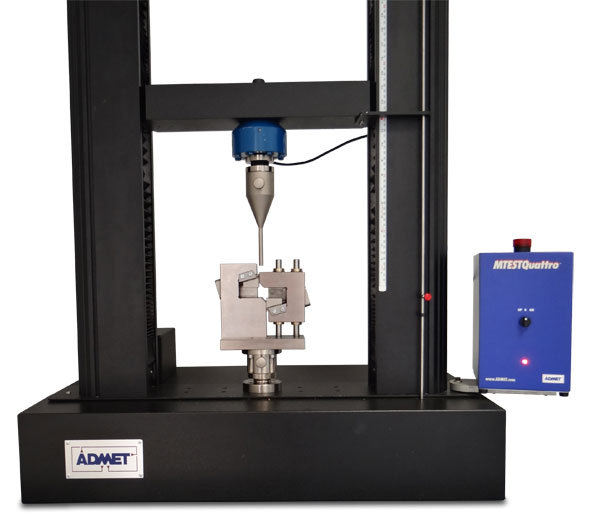 Specialized shear fixture on an eXpert 2600 for ASTM D5379

The specimen is inserted into the fixture with the notch located along the line of action of loading by means of an alignment tool that references the fixture. The two halves of the fixture are compressed by a testing machine while monitoring force. The relative displacement between the two fixture halves loads the notched specimen. By placing two strain gauge elements, oriented at 45° to the loading axis, in the middle of the specimen (away from the notches) and along the loading axis, the shear response of the material is measured.

ASTM C273 shear fixture, used to test sandwich core materials, consists of two loading plates as seen below. The test specimen is supported by these loading plates bonded to the facings. 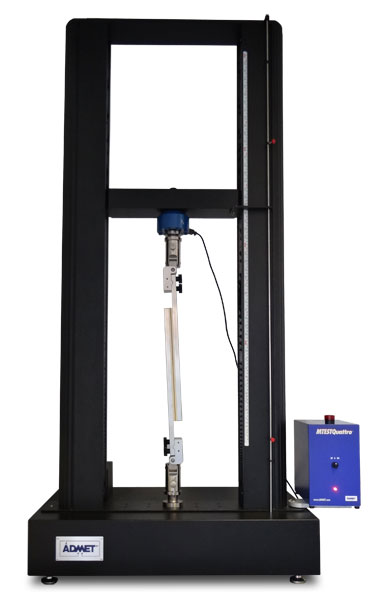 ASTM D905 is for shear testing of wood samples. The test specimen is placed in the self-aligning guillotine-like shearing tool that ensures the force applied is perpendicular when cutting specimen blocks.